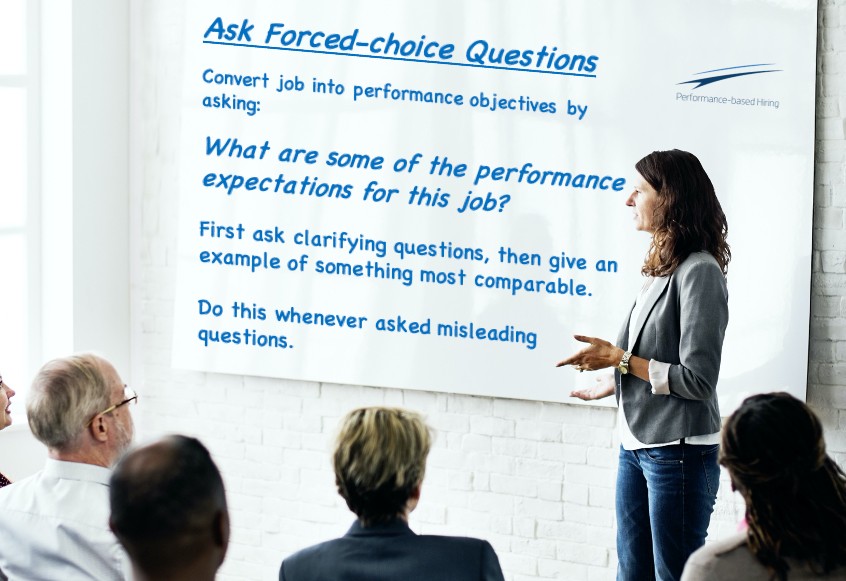 It is important to focus on performance expectations rather than compensation and years experience in the interview. As not knowing exactly what type of work you will be doing leads to dissatisfaction.

If a candidate accepts an offer largely based on the title, compensation and location, a Win-Win Hiring outcome is unlikely. Win-Win Hiring means the hiring manager is happy with the person’s performance on the one-year anniversary date and the new employee still finds the job motivating and satisfying. Achieving this positive outcome requires a lot of effort before, during and after the interview by everyone involved, especially the job seeker.

Of course, in today’s tumultuous times getting a job is sometimes all that really matters. But times will change and this self-paced (no cost) course will help job seekers prep for the interview and get a better job regardless of the economic conditions. The idea behind the course is that in order to achieve a Win-Win Hiring outcome both the interviewer and the candidate need to focus on the content of the job rather than the years of experience, the depth of skills and the compensation packageduring the interview. Too often this doesn’t occur until the outboarding process, which is way too late.

In most cases interviewers won’t provide the candidate with enough details about the actual content of the job in order to even make a proper career decision. That’s why job seekers need to take matters into their own hands.

The process starts by asking this one question at the beginning of the interview if the person is assessing something other than the real performance requirements of the job:

What does the person need to do to be successful in this role?

The idea behind this question is that by defining success as a series of key performance objectives rather than a list of skills, experiences and standard competencies, it’s possible to more accurately determine if the person is a good fit for the role and if the job represents a good career move for the candidate. (FYI, here’s the course interviewers and hiring managers should take rather than having to rely on job seekers forcing them to ask the right questions.)

For example, it’s far better to say the new product manager will lead the development of the product roadmap collaborating closely with the engineering team rather than demanding a bunch of “must-have” prerequisites like a specific degree, X years of experience and strong team skills. Given this performance objective, determining competency and interest involves having the person provide an example of a major accomplishment doing something comparable.

Once the candidate asks the interviewer to describe some of the performance objectives of the role, they then need to describe accomplishments that are most comparable to these actual job requirements. If similar, the person is likely going to be considered a semi-finalist for the role. Answering these questions takes some practice but it’s a surefire technique for better understanding real job needs and if the job represents a worthwhile career move.

Preparation and Practice is Essential in Order to Be Accurately Assessed

As you’ll learn in the course, preparation starts by converting each of your major strengths into two-minute stories describing examples of accomplishments that best demonstrate how the strength was successfully used on the job. It’s important to write down these details (i.e., dates, big changes made, outcomes) and practice telling these stories out loud. This way the specifics will be more easily recalled during the interview.

Once you get comfortable answering questions this way, you’ll be able to add another step during the actual interview to ensure you’re fully and accurately assessed. The idea here is to be aware of any critical strengths that have not been covered and then proactively ask the interviewer if the strength, like team collaboration or some technical skill, is important in the role. Most often the interviewer will say yes. Then it’s up to the candidate to tell a convincing story ending with a question like, “Is this the type of effort you think would be required to be successful in this role?”

Focus on the Career Opportunity, not the Compensation

In most cases, achieving a Win-Win Hiring outcome is more important for the candidate than the company, since without knowing what type of work is involved dissatisfaction can quickly become a problem. That’s why I urge candidates who want to get ahead to think more about the work they’ll be doing rather than the compensation package when deciding to accept an offer or not.